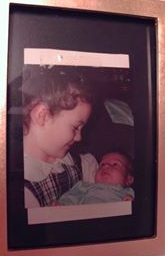 Lauren was the first grandchild on the Alston side of the family.

She loved her little 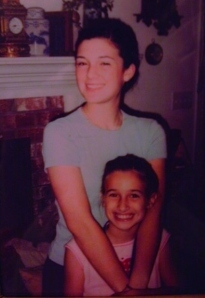 cousin Elise and she was so happy to welcome another girl in the family…cause she already had a little brother and 2 boy cousins.  She enjoyed playing with her…showing her new things… singing and putting on plays together.  I’m sure there were times Elise might have thought she was a little “bossy”… and well…she probably was…lol.

At our Alston Family Christmas a couple of months ago…Elise came in all excited.  I was standing in the laundry room…which is a pass thru from the garage  to the living room…when they came in…Elise and her boyfriend.  She had a huge smile on her face and saddled right up to me…she put up her hand for me to see…her ring…she had gotten engaged.  I hugged them both and told them how excited I was for them.  She was worried about how to tell the grandparents…Mimi especially…without giving them a “heart attack.”  I said…”Girl…lead with your hand out front…show’em that pretty ring…just tell’em”…then we both giggled.  She finally worked up her nerve and told them…of course they were happy and excited for her…no heart attacks for anyone.   Mimi asked how and when it happened.  It is a sweet story…the guy did it up right…made it real special.   He enlisted the help of the friends…a married couple…who had introduced them at church one day…to help with the excuse to “go out to dinner”…so they would be dressed nice…when they took pictures and video.  They all went out to eat at a nice restaurant in Lufkin but then drove back to the church in Nacogdoches where they met.  He played his guitar and sang to her…then whipped out the ring he had hidden under the front pew and proposed…on the altar of the church.  Wow… so unique…thoughtful…meaningful… and special. 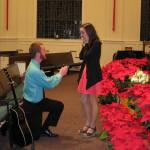 As they told the story and showed us all the pictures…it hit me…tears started rolling…I tried to hide them…to stand at the back of the group…so maybe they wouldn’t notice…I didn’t want to ruin their joy and excitement.  I wouldn’t get to have this moment…with Lauren…when she squeals and shows off her ring and tells us how “he proposed.”  It is…  another “loss” to deal with.

Elise had been dating him a few months when she brought him to the Alston family Christmas in 2012.  We all liked him immediately…and we knew if he could take our joking and picking on him and giving him goofy nicknames…then he would fit in our family just fine.  And as we have seen them together over the last 16 months we knew they would make a great couple.  They both love the Lord…are musically talented…great with kids… volunteers…camp counselors…help each other study in college…know how to work hard… and are positive people with great attitudes.

I want them to know how excited I am for them…

and I truly hope I didn’t steal their joy that day.

I love you guys…

and Welcome to the family, Aunt Suzie

One thought on “An Engagement”