Is was a pleasant surprise to find a memory letter in the mail after we returned from Florida.  It was from a Sunday School teacher of Lauren’s at First United Methodist Church.  These letters are what a parent…who has lost a child…longs to receive and are a cherished treasure.  Along with the letter was a very nice donation… to continue Lauren’s legacy of helping other.

I read the article in the Charm magazine about the wonderful things you are doing in your daughter’s memory,  I was so pleased to find your contact information.  I had been wanting to let you know that I did not hear about what happened to Lauren until almost a year after the accident.  Even then, I didn’t put it together that it was Lauren.  I’m Debbie Adkins.  We attended First United Methodist Church and I had the honor of teaching Sunday School with Scott for three years.  I was blessed to be with these kids and you daughter for her 9th, 10th and 11th grade years.  Can’t believe I got to have access to these amazing kids for that long.  Your daughter though, so smart, bright, independent and sure!!  I remember that being such a great group of girls.  My daughter Ashley had attended Hudson, but we moved to Central Heights her senior year.  We drove and attended church there the next two years but I stayed with the Junior group when they became seniors.  I remember Lauren being so sure of her faith.  She had a beautiful working knowledge of the word and was always giving suggestions or guidance to others.  It was during these years that I was so blessed in return.

I hated that I didn’t know, didn’t go the memorial service or have a way to let you know that not only did Lauren touch my life, but she was so loving and supportive, in her confident way, to so many in Sunday School.  She truly was an example of how you could be happy with yourself, rely on your faith and carry on.  No doubt those assets are you as well.  Just wanted to touch base and finally get the chance to let you know and wanted to offer some donation toward her memory. 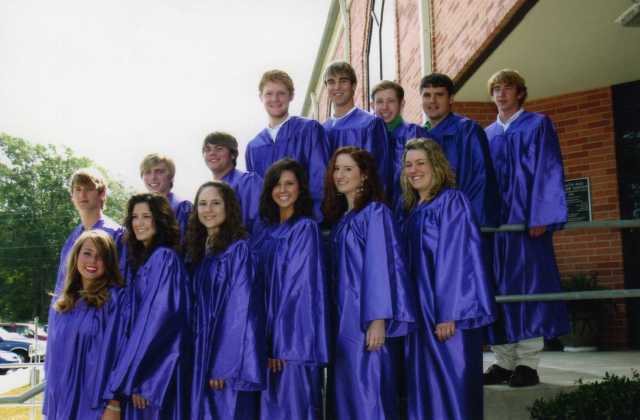 FUMC Senior Class of 2006.   Lauren is second from the left on the bottom.   None of them had their honor cords or neck sashes on because they hadn’t arrived yet.

It has been 3 years since a good friend of ours passed away….Doug Rogers, 49 years old, had a heart attack.  With Doug and his family on my mind the last week…it got me to thinking about memory letters and how precious they are to receive.

It was a Friday afternoon and Bryan and I were driving to Fredericksburg to stay for a couple of months.  Doug, or BamBam as we called him, called Bryan just to chat and check on things.  Bryan talked with him for a bit but we were having some truck troubles…we were pulling a 36ft 5th wheel and in long lines of “stop and go” traffic.  We were afraid of breaking down and backing up traffic even more and decided to pull off the road to check it out…so Bryan said he would call him back later.  That was the last time Bryan spoke to him….we got “the call” on Monday letting us know he had passed away.  We couldn’t get the truck repaired in time…so we weren’t able to drive to Tulsa Oklahoma for his service…we called his folks to let them know.   So I did the next best thing I could think of…something we thought his folks might like…I wrote a memory letter.

I told them how BamBam had just been at our house a few weeks earlier.  He had come to visit and work on a rent house of ours that our son, Taylor, was going to move into.  How he taught Taylor new construction skills and tricks of the trade.  How I enjoyed cooking for him… a single man who really appreciated my home cooking… and always cleaned his plate…literally and figuratively…then thanked me for making the meal.  How there was much laughter and joking going on.  How he talked about what joy and satisfaction he got volunteering at the Salvation Army…and buying milk for the kids there because it wasn’t often they got it… how the kids called him “The Milk Man”…and  how much he loved milk too…we went through gallons while he was at our home…lol.  How he talked about getting back into reading his bible more and what he was learning.

His Mom called us, after receiving the letter, to tell us how much it meant to them and what a precious gift it was to hear stories about their beloved son.

The letter I wrote was just about our time together, funny things that happened, the joy and laughter we had just hanging out.  It didn’t have to have fancy words…or be super long…or about some major event…just the simple pleasures of life we shared with their son. 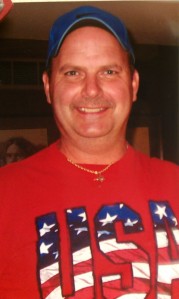 We made a donation to the Tulsa Salvation Army in memory of Doug “the Milk Man” Rogers…asking it be used to buy milk for the kids.